So excited to have Hidden Prey out with Totally Bound! The “Deadly Intent” series is set in my home town and the surrounding area. 🙂

Order your copy from your favorite retailer here!

I hope you enjoy reading Hidden Prey as much as I enjoyed writing it!

A little look at being tall, dark, and undercover…

The life of an undercover agent has to be fascinating in some ways, scary as hell in others, intriguing, and you know it’s absolutely no doubt hard work.

Let’s add sexy because what UC agent in romance isn’t? 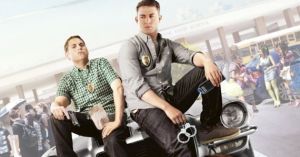 Ok, so in “21 Jump Street” the guys are a little goofy–a lot goofy–but hey, it has Channing Tatum

Have you ever wondered what it would be like to be a UC who’s living on the edge? I have. Perhaps you are even thinking about writing a suspense or romantic suspense novel involving a UC. If so, you’ll need to know what he does on a daily basis.

As a reader, here are a few things you might think of when considering writing what it’s like to be tall, dark and undercover…

The most inconvenient aspect of being an undercover agent is that he must be available 24/7. He could disappear at any moment to report for an assignment, to investigate a case, or meet up with the bad guys.

Damn, that means the bed won’t be warm.

A high number undercover agents are probably single bachelors who haven’t established a family. Likely they don’t have time due to the fact that they’re away from home so much.

Fitness must play a role in the life of an undercover agent. After all, he needs to be in great shape in order to chase the bad guys!

Not Dark. Bald. Bald is hot, especially when it’s Vin Diesel… and his UC role in Triple X

Whoa. Look at those biceps, and, um everything…

Undercover agents probably don’t have much time to cook gourmet meals, so they tend to eat on the go.

No cooking? A man after my own heart.

If 007 has a glamorous undercover role, then it has to be, right? Never mind our current 007 isn’t dark and is a blond.

Tall, Blond, and Undercover is fine with me.

It goes without saying that Mr. TDorBandTallUC MUST kick ass on a regular basis. 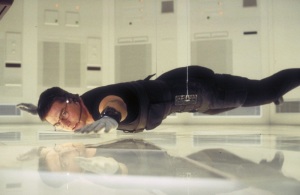 Really, who cares if he’s not tall? Tom Cruise in Mission Impossible–I’m there.

Take for example Ethan Hunt. Now he is seriously Kickass. However, he’s not exactly tall–but who cares? It’s Ethan Hunt!!

So let’s think about it.

Be still my beating heart.

The life of a UC is unique from other areas of law enforcement. If you want to learn more, do your research within the mystery/suspense/thriller genres, attend conferences, and interview people in the field. Fiction and non-fiction reads and research will give you a better look at the daily lives of UC agents.

But if you’re a reader, then this rather biased look into the life of an undercover agent might fit alongside what’s already in your imagination…

Martin Riggs/Mel Gibson, Lethal Weapon Series. Martin Riggs is a fixer upper, but if you are into helping men heal, then you’ve found the right cop. Although most of the other officers think that Martin is at best crazy, and at worst suicidal, in reality he’s just hiding behind this facade to mask the pain of his wife’s death. The healing process is slow, but bit by bit, Riggs begins to drop his guard, and soon becomes a part of his partner Roger Murtaugh’s (Danny Glover’s) family. Martin continues to heal, and soon reenters the dating world, and calthough he is hurt several times, he eventually recovers enough to marry Internal Affairs Detective Lorna Cole (Rene Russo). Martin also has no problem expressing emotion, so if you do manage to heal his broken heart, you’ll always know how he feels about you. Plus, he’s cute. 80s Mel Gibson cute.

Nick Walker/Ryan Reynolds, R.I.P.D. If you’re the type that wants literally undying love, look no farther than Nick Walker; although since he’s played by Ryan Reynolds, you probably won’t want to look anywhere else. While Nick’s body is great (did I mention that he’s played by Ryan Reynolds?), his capacity for love really sets him apart. When Nick falls for you, he falls hard and will love you with all his heart and soul; even if it means betraying his own morals in a misguided attempt to give you a better life.

The sexiest thing about Nick, however, is his selflessness. Knowing that he and his wife can’t possibly be together (he’s a dead police officer and she is very much alive), he sets her free to find happiness, even if it is in the arms of another man.

Nathan Rhodes/Chris O’Dowd, Bridesmaids. He may not be eye candy, but looks aren’t everything. If you’re the type that goes for the “guy next door” then Nathan Rhodes is the one for you. Shyly charming, Nathan is an all around nice guy that any woman would be lucky to have. Just be warned; he won’t be in bed when you wake up the next morning-because he’s already in the kitchen making you breakfast. Nathan is supportive, and even if he sometimes goes a bit too far, he will always encourage you to follow your dreams. In addition to being funny, he’s also sensitive and will always tell you the truth-even if you don’t want to hear it.

We’ll give away  over 40 books–including ten signed trade paperbacks and multiple eBooks; a box of goodies; $100 in Amazon gift cards; and more.

We will also have T-shirts signed by all the BMGs including alternate pen names.

And who knows what else!

We also have a Facebook Event Page, but it is not mandatory to sign up there. Serves as a good reminder though. 🙂  BMG Event Page